After meeting up with an old school friend who was planning on going traveling, I made a decision on a whim to get a month’s leave from work and join her…

We started in the outskirts of Bangkok and rested up for two nights close to Suvarnabhumi airport after landing. The hotel was fairly nice, with a decent restaurant and nice pool but with a lot of construction work going on and not much in the area outside of the complex of any interest.

After copious amounts of reading and googling by the pool, we decided to make our way from Bangkok to Koh Chang island. For the budget traveler, you can undert5-hour5 hour bus and ferry journey for the equivalent of £10.

There is also an internal flight option from Bangkok to Trat (the town near the ferry port) and then a ferry transfer from there but at a much higher price. We opted for the bus journey as we wanted to keep our budget low.

I won’t lie to you, it wasn’t exactly a smooth ride! Often it would get so bumpy I would leave my seat involuntarily! A pickup truck full of plastic bins drove passed us with the driver grinning and waving, only a few seconds later he overtook the bus and one of the bins came loose and hurtled towards us! There were also plenty of gruesome toilets at gas stations when we stopped for breaks just to make the experience that much better!

There were some scenic little towns lined with markets and palm trees that we whizzed past. The bus journey went relatively quickly. We dozed somewhat, until every now and then the lurch, bump or sharp turn would jolt us awake. The bus driver was a little eccentric and spoke only a bit of English and constantly coughed up phlegm very audibly which he would then spit out the window.
When we reached the ferry port, it was quite a pleasant balmy evening and the sun was just beginning to set… 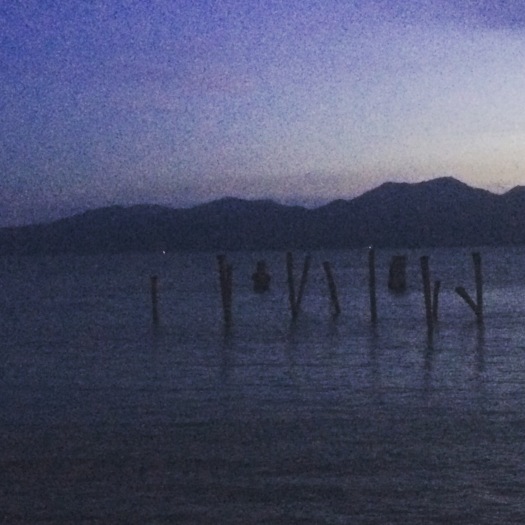 Towards the end of the ferry journey and much to our relief, the bus driver came to fetch us. With windswept hair and salty skin, we piled back into the bus. After a precarious drive up the steep, winding roads in the dark, which at times had resorted H and I to grab on white knuckled to the seats.

We arrived at The Nature Beach resort in Lonely Beach late that evening. A lovely little place right on the sand where you can rent bungalows ranging from the basic (which we went for, perfect for budget travelers at around £6 a night!) to the more luxurious.

Some are perched on stilts over a small river and dotted everywhere are palms, bushes and wonderfully bright hibiscus flowers.

Starving, and having spent most of the day living off crackers and iced tea, we headed to the restaurant for stir fried noodles, vegetables, beer, and fresh young coconut.

We met some people from Cambodia and stayed up drinking Thai whiskey and lemonade shots on the beach. After a while, we headed down the beach to a bar with a hippie traveler crowd who had been drinking some “happy shakes” and watched them dance in their own little world.

We had a few beers at the bar and then they suggested a club. We walked in the dark, slightly tipsy, along a river, through a wooded area and over a plank of wood across the water to the back entrance of Ting Tongs. The club had an old tree growing in it, with a tree house style loft room, neon paintings on the walls and trance music playing.

We eventually got back at about 4am. I rummaged around in my backpack for a sleeping bag and pillow, hoping the sleeping bag would cushion the hardness of the bed somewhat!

When we woke the next day, I discovered that our shower was cold water only (something to become accustomed to in Asia) as where we were staying was one of the very basic bungalows for about £3 each a night. After the initial shock, it was actually quite refreshing!

We headed to the restaurant to grab some breakfast/lunch. We then had a long walk ahead of us (about 5 steps) down to the beach for a spot of sunbathing. Having taken our trip in the rainy season, every ounce of sunshine was to be enjoyed! We swam in the waves and ordered fresh coconuts to sip while we sat in the sun.

Lonely beach is a long stretch of white sand, at the time of year we went there were quite a lot of waves. The beach is fringed with palm trees and offshore there are 3 little islands. When the water is calm you can take a boat or paddle board out to the islands. I’ve been told that the area is also excellent for fishing, snorkeling, and scuba diving. 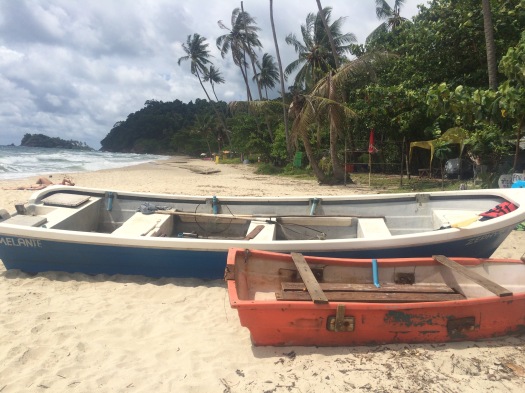 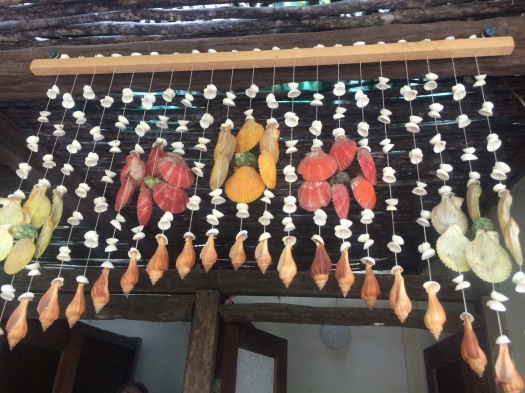 When it started to cloud over in the late afternoon, we headed back to the room for a quick shower and then walked up to the local shop to grab a few bits. I hadn’t bothered bringing a razor in my luggage as I had assumed all the shops would sell them. Well, nearly a week into our trip and I hadn’t found any yet, and was forced to be rocking the au natural look!

We walked through the town, which was mainly quaint bamboo buildings and shacks… 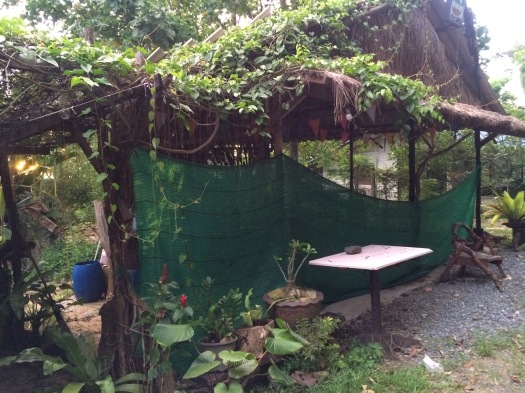 And on the way up to the shop, we passed a large group of monkeys by the road and in the cables above. 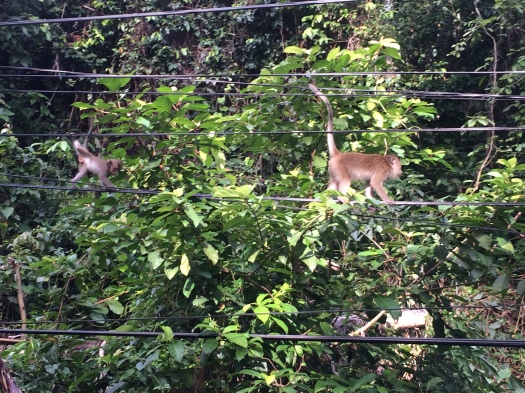 On the way back we passed the monkeys again. One ran through H’s legs and jumped at me screeching and grabbing at the shopping back. I screamed and chucked the bag with the monkey still holding on as far as I could throw it and we ran up the road! So we still had no bottle opener, no razors, and no water. Fantastic.

We got back empty handed and headed out for dinner where we ordered mojitos and then a Thai red curry with seafood and rice.

We bought bottles of water at the bar to take back to the room, not being up for another trip to the shop after that particular incident! We had only booked 2 nights at Nature Beach initially but that evening we extended it to another two as we were falling so in love with the island.

For the rest of that evening, we sat cross legged at low tables in the wooden pagoda on the beach.

Listening to the waves crashing in the dark, remixes of songs with drums and flutes played as we sipped tequila sunrises. Lizards darted and flicked across the ceiling above and one or two quickly skittered over the floor near my feet.

The next day we relaxed on the beach. Hot sand between our toes, sea salt tangling our hair and just enjoyed the simplicity and sweet feeling of nothing to do and nowhere to be in a hurry.

H sat with her vintage camera working out the lighting and we got talking to some people from Birmingham, and a photographer who had been living and working in Asia for a while. B from Manchester had been in Koh Chang for a month staying with his Father and J from Birmingham was supposed to have carried on to Cambodia with his travelling companion but was loving the island too much.

After chatting for a while on the beach we headed into town with them for dinner at The Magic Garden, the restaurant is great and they had huts you could arrange to stay in for free as long as you spent a minimum of 300 baht in there on food and drink.

After dinner, we nipped back to get changed and met them for drinks at the Siam hut (where we had seen the happy hippies) bar. We ordered cocktail buckets and tequila shots and stayed until the early hours. We chatted and drank and made a plan with J from Birmingham to go to one of the local waterfalls the next day.