So, I met F the next morning and we went over to The Yellow reception to quickly book and print off some tickets for The Vatican and grab a map.

We had lunch at a little cafe round the corner; I had a bowl of spaghetti with asparagus and seafood, and well, F ordered two dishes because he insisted the portion sizes were too small. I don’t know where he puts it all!

After lunch we began walking, it was quite a nice day, and we had been told the walk would be about 30-40 minutes which didn’t seem too daunting.

We wandered past little side streets, quaint cafes, through markets brimming with flowers, fruit and veg, side stepping out of the way for the occasional moped. 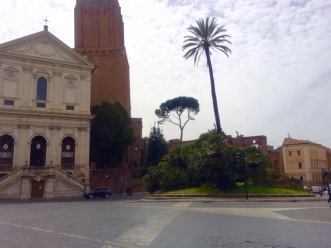 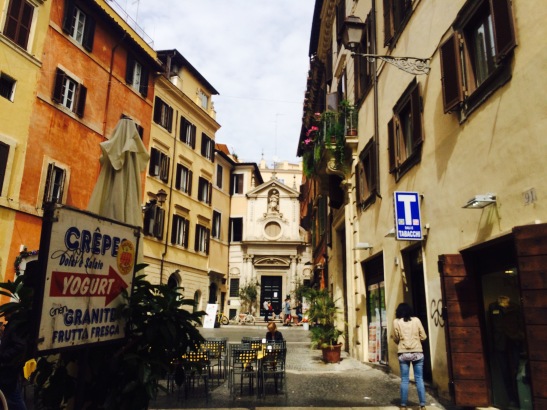 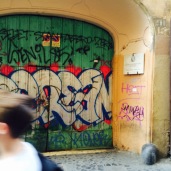 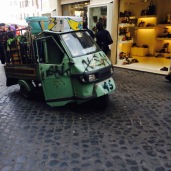 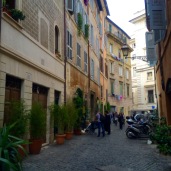 After half an hour or so, we stumbled upon Trajan’s market…

Trajans market
Estimated to be built in apx. 100-110 AD
Designed by The Emperors architect Apollodorus of Damascus,  it represents the ancient equivalent of a modern shopping centre, comprising of over 100 shops and offices.

The ruins
Opposite the market, stands the ruins of Trajan’s forum and the commemorative Trajan’s column that represents the Emperor’s victory in the Dacian wars.
Hard to see when not up close, the column is covered in thousands of intricate engravings depicting scenes from the battle. 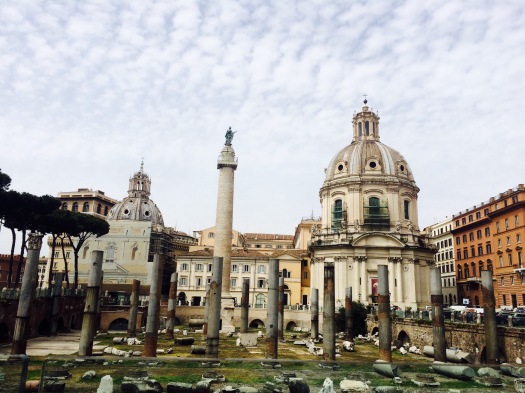 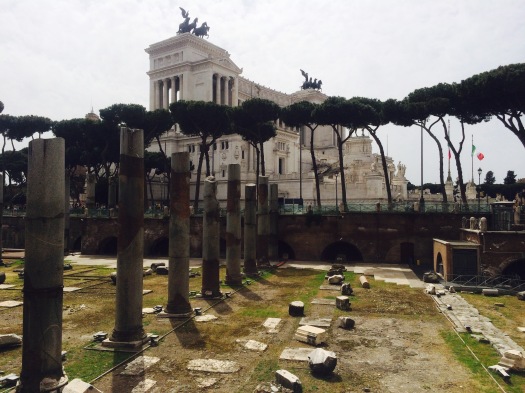 We stopped to ask for directions and we were told The Vatican was another 30 – 40 minutes walk!

We continued on until we reached a bridge and a building on the right hand side. I’ll admit, I had no idea what we were looking for so I was hoping this would be it, but it was actually Castel Sant’Angelo.

Once the tallest building in Rome, it was originally intended to be a mausoleum, later being used by Popes as a fortress, and is now a museum.

We walked around for a bit and eventually we were walking up the straight road that led to The Vatican, flanked by a chorus of nuns.

I kid you not… 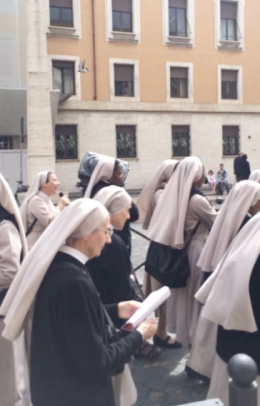 At the end of the road we were re-directed towards the Vatican museum which was few minutes round the corner.

So all in all, after approximately 1 hour and 40 minutes, we finally reached the entrance of The Vatican.

We had booked our ticket for a particular time slot, which we had well and truly missed. However, there was no queue and they let us through without so much as a shrug.

I would also like to point out, these were the shoes I wore to The Vatican:

I know, I know. I make poor life choices.

I cannot tell you how much my feet hurt after that walk. My toes were red and throbbing.

Any way, we entered the museum, walking past The Vatican post office…

And headed towards the exhibits, walking through row after row of ancient carved stone tombs, mosaics, paintings and enormous tapestries. 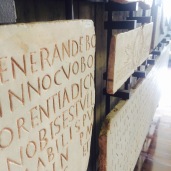 We then made our way through rooms and corridors full of sculptures and busts, through a garden with a fountain, past sleeping guards, and a courtyard with little fruit trees. 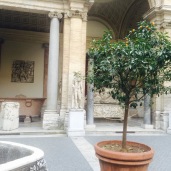 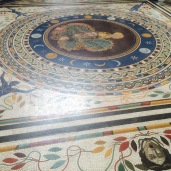 Two of my particular favourites: 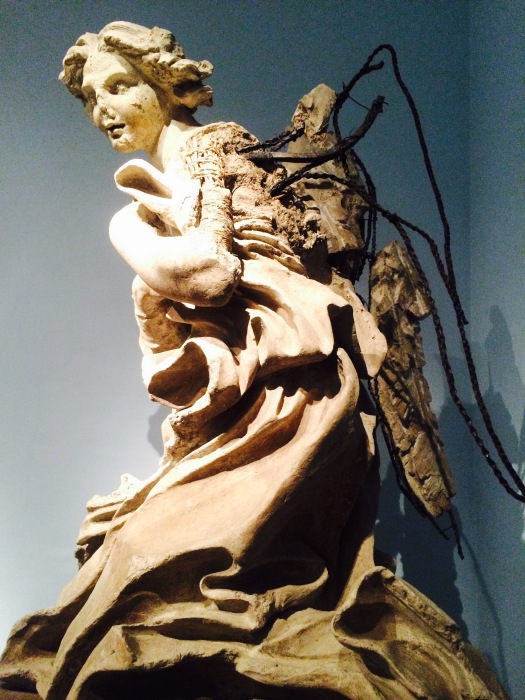 One of Bernini’s angels with broken wings.

Then on into an Egyptian exhibit with cases of artefacts, a sarcophagus, mummies and an Anubis statue standing guard. 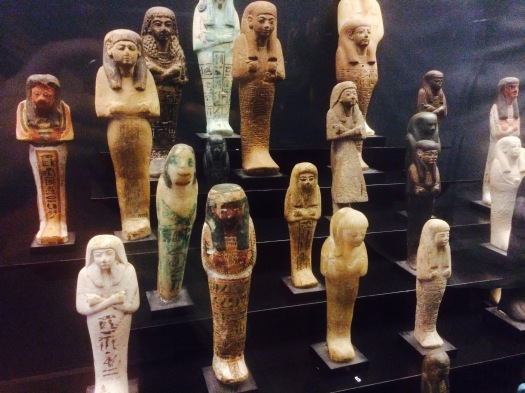 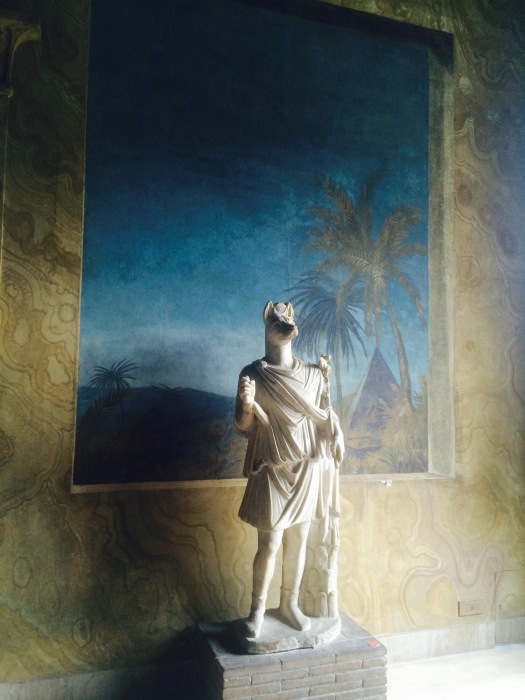 Through further corridors, some utterly covered in gold leaf, some displaying ancient maps along the walls.

We arrived in a room and took some time to stand in awe at the intricacy of Raphael’s “School of Athens” and “Disputation of the Holy Sacrament”. 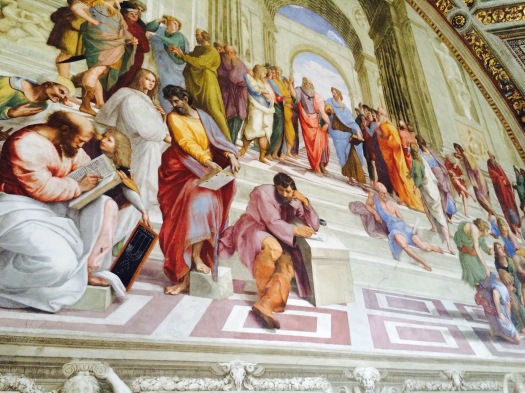 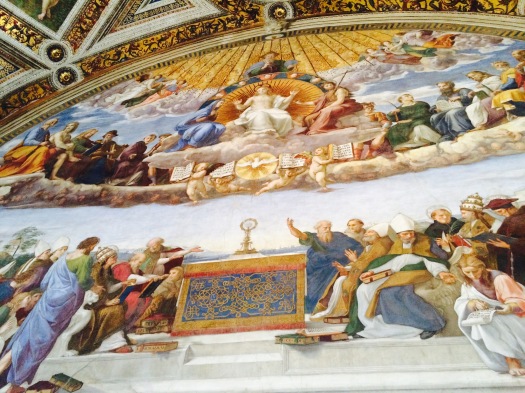 You walk in, cast your eyes upwards and then it hits you – Michelangelo’s masterpiece, which I totally did NOT take photographs of because that’s not allowed. 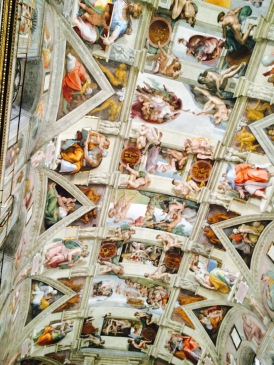 (I found these, just lying about)

I had to sit down for a bit due to the throbbing agony of my feet, with F next to me chuckling about how red my toes were.

After exiting The Sistine Chapel, most crowds made a beeline for St Peter’s Basilica but F pointed out The Cupola.

We almost gave it a miss because there wasn’t much information and were not entirely sure what it was. Luckily F overheard a Spanish tour guide explaining to a group as they walked past.

The Cupola is a dome, and after climbing over 500 stairs you are treated to a 360 ariel view of the city.

My legs began to quiver a bit at the mere thought of climbing all of those stairs with the state my feet were in.

I said no, but F convinced me.

You can pay a certain amount and climb all of the stairs, or you can pay a little more and get the elevator. However, the elevator only takes you up half of the way, so we decided to hard or go home.

You climb winding stairs in concentric circles for so long that your eyes start to go funny.

F is pretty tall so he took two at a time with ease as I trotted along beside him.

After these winding stairs, you make your way through a corridor with wonky walls that makes it feel like a fun house at a carnival, then climb more stairs with your neck at an angle because of the aforementioned wonkiness.

You reach a room with a metal sort of bridge to cross.

Then onwards! More stairs! And more!

I was probably more vocal than I should have been (F was a little taken aback and mentioned that I’d said fuck at least 10 times in the last few minutes) and I would have been happy to never see another stair again.

Every few minutes you would reach a flat landing and my heart would soar, thinking it was finally the end, but alas, with a sinking stomach, I realised there were yet more stairs.

Then there were winding stair cases which were fairly narrow, and we had to squeeze past the people who were trying to catch their breath.

The final winding staircase, was not much wider than one person, the small metal steps were probably about the size of my foot, and there was no bannister, only a rope hanging down the middle.

We finally reached the roof and I would be lying if I said my legs weren’t shaking. I tried not to show this though as F was infuriatingly fine and was already eagerly striding towards the entrance.

After a flight of stone steps and entering the building, we found ourselves facing a metal cage, and peaking through the mesh, was a breathtaking few as it became apparent we were in the dome of St Peter’s Basilica.

We then proceeded to the outside section where we slowly walked around and gazed down upon the city from a birds eye view.

It was really quite beautiful, I’m glad F convinced me to go.

Now I faced the daunting prospect of getting back down the stairs.

F told me to get the elevator and started walking back down, but I felt a bit bad so I took a deep breath and started trotting along behind him again.

We finally reached the bottom and made our way to the main entrance of St Peter’s. 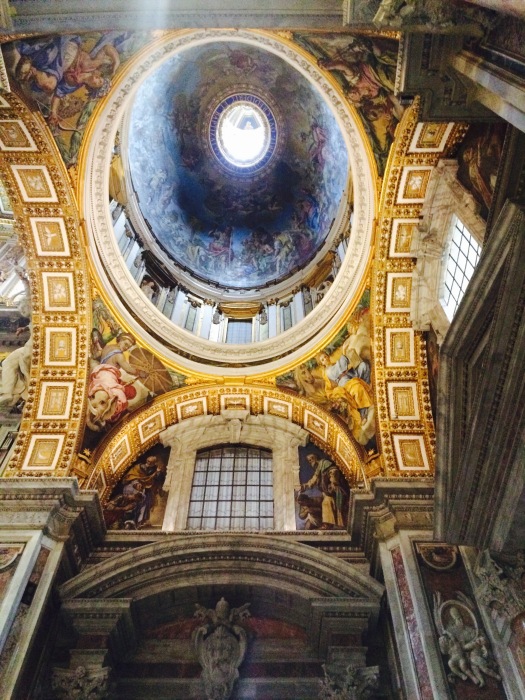 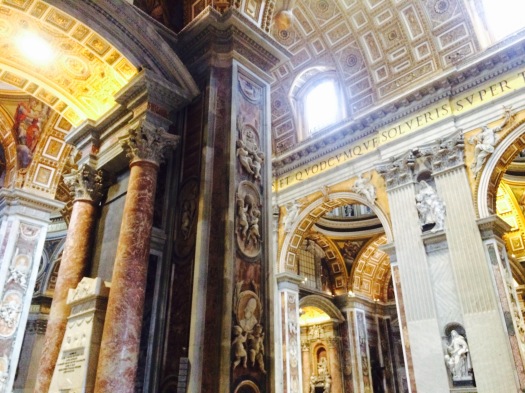 After this, we were ready to eat and be on our merry way back to The Yellow.

We had a quick gawk at the Swiss guard and began walking back.

We had planned to get the bus, but after walking into a bus station that we found, having got out of the elevator to find the whole floor in darkness like something out of a horror film- we came to the unanimous conclusion that we were probably better off finding the Metro.

We got directions and headed off to the Metro, but after 10 minutes we decided we couldn’t hang on any longer as we were utterly ravenous and needed food pronto.

We stopped at a little pizzeria and ordered one each. When the pizza came, I immediately started shovelling those slices of gooey cheese heaven in my face.

F started laughing and pointed out that the owner had taken a photograph of me al la mid shovel.

I really hope that doesn’t end up being used as a promo shot somewhere.

Who knows, when I return to Rome, I could be famous!

Having devoured our pizza and now feeling content, we resumed our mission to find the Metro, which we eventually did, and headed on back.

After exiting the station, we walked outside, where there were soldiers stationed, and I unknowingly walked over an air vent, making my dress fly up and causing me to squeal and then laugh so hard at myself that I had tears in the corners of my eyes.

Upon reaching The Yellow, I immediately retreated to my dorm where I wrenched off those bastard shows, laid down, put my feet up, and resisted the urge to sob as my poor little red toes pulsated.

This aside, it was a fantastic day, I thoroughly enjoyed it, but learnt a valuable lesson in appropriate footwear!