On my last day, we wandered around Haarlem, down cobbled streets and passed plenty of quirky looking shops and stylish restaurants.

We stopped opposite the St. Bavokerk church to have a coffee and ordered a slice of chocolate pie to share. 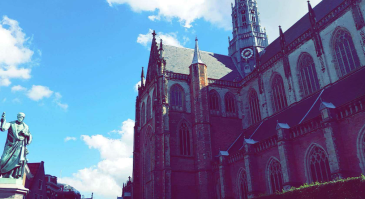 It’s as amazing as it sounds. It’s like a giant brownie in a way.

With slagroom – which is whipped cream. 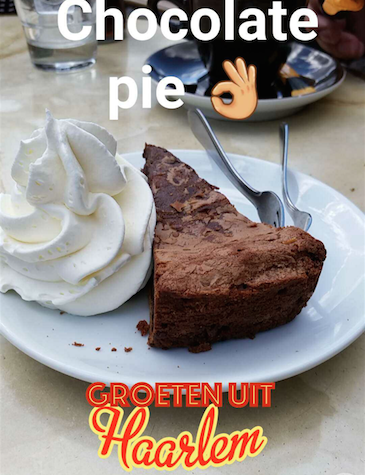 After that, we walked around the church and down more streets.

We stopped at a little place that apparently sells the best fries.

Obviously, we were pretty full, we’d just had coffee and chocolate pie and slagroom (yes, I’m rather proud that I’ve remembered a word, and also it’s a little funny for the Brits).

We still got some fries, but just a small cone to share.

Crispy, golden chips (or frites) that were slightly fluffy in the middle and slathered with satesaus (peanut sauce). 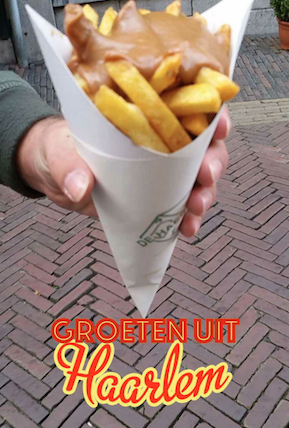 They seem to be rather fond of peanut sauce over here.

Not that I’m complaining!

We then headed back to the apartment to chill for an hour or two, before heading towards the airport, but not without stopping for one final fix of Indonesian food!

A little place, half shop, half restaurant, served buffet style, in pretty huge portions at a low cost and it is the bomb.

Baked rice, bamboo shoots, two kinds of tofu, tempeh, and an assortment of veggies and different sauces which I didn’t know the names of, but tasted really good. 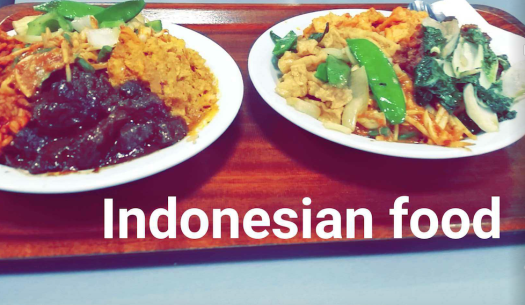 And then, the time came for D to drop me off at the airport.

It was a little sad, I could have easily spent more time there with him, he’s a really lovely, funny guy, and Haarlem is such a nice place to stay far from the mad crowds and drunk (admittedly mostly British) tourists of Amsterdam.

Luckily I had got to the airport a little early, as the Easyjet apps weren’t working and it took a while to get sorted.

This time round, I only had my bag checked once, and that was my own fault because I had a large tub of cream cheese in my hand luggage which apparently is classified as a liquid!

The train back to my mum’s was unsurprisingly delayed, but my chance, I happened to get on the same carriage as two of the directors that used to work for the company I have recently left.

So I had a good chat with them about work and travel (past, present, and future), leaving on the note of some possible future venture before hopping off and staying at my mother’s so that I could see my little sister off to University the following day.

One Reply to “A little more of Haarlem”