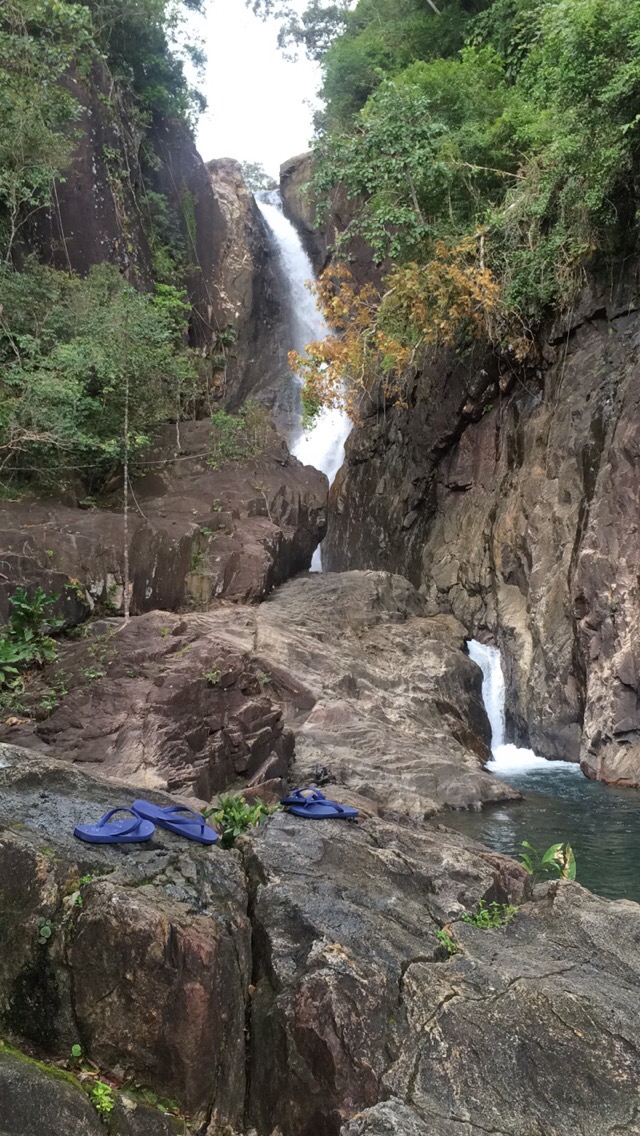 The next day, feeling quite fragile, we all had lunch at Nature Beach and sat on the sand for a little while, chatting with some of the guys that lived on the island. We then walked up the road and hailed a taxi which drove us up to the area where one of the waterfalls was located.

We had a look at a few market stalls and explored a little medicinal shop ran by an elderly man who told us he was a shaman. He showed us bottles of all coloured liquids and tinctures which we rubbed between our hands and pressed into our necks at his instruction.
The waterfall we went to required entry tickets of about 200 bhat to be purchased and also “closed” at a certain time. Unfortunately, we got there quite late in the day and only had about an hour and a half there. The waterfall is about a 10 – 15 minute walk up through the jungle on stone paths.

Generally, a good time to go to waterfalls in Thailand is towards the end of the rainy season. People have mentioned that in peak season they start to dry up and don’t look quite so impressive. 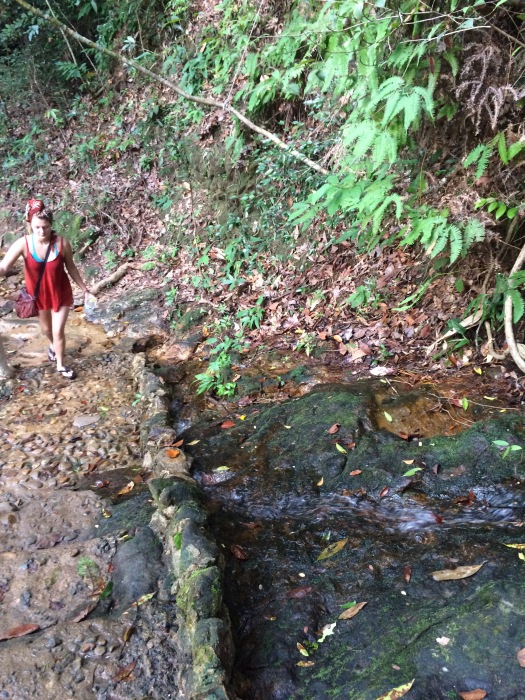 After a fair amount of stumbling and toe stubbing, we arrived at the waterfall and it’s lagoon and soaked in the view. We clambered over rocks to the blue water of the lagoon where fish darted in and out. 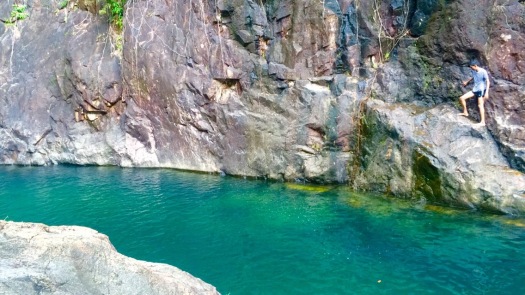 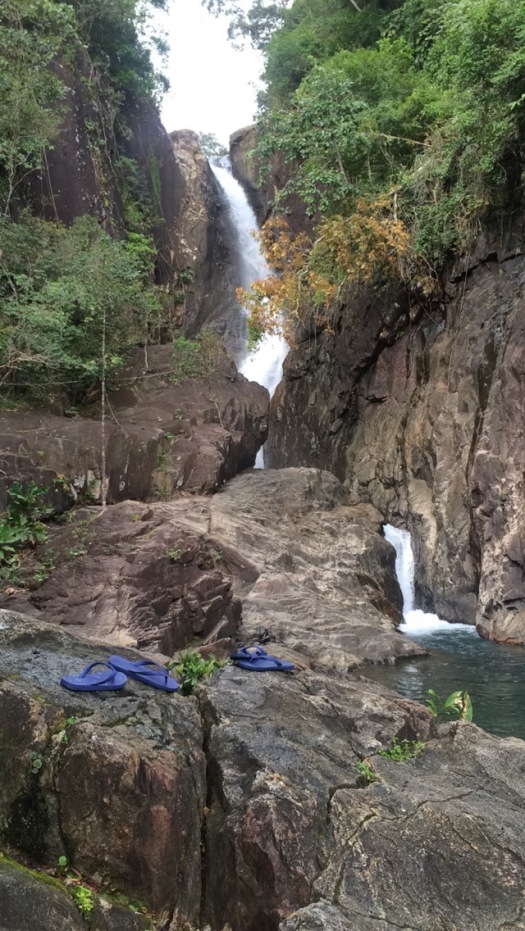 I sat on a rock with my feet in the water and a large fish nibbled at my toe! It took me by surprise and made me jump. I lost my balance and slipped on the rock, falling backwards with a splash into a Chinese couple just behind me! If it’s not clear to you by now, I am the epitome of elegance! 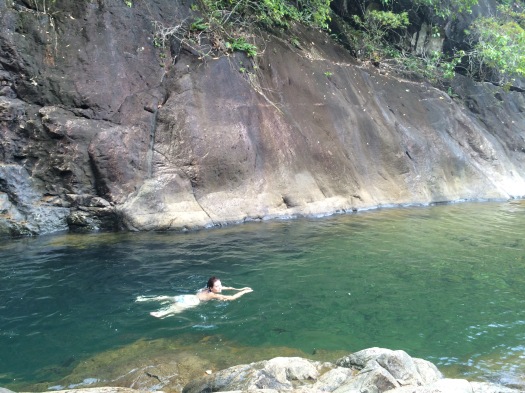 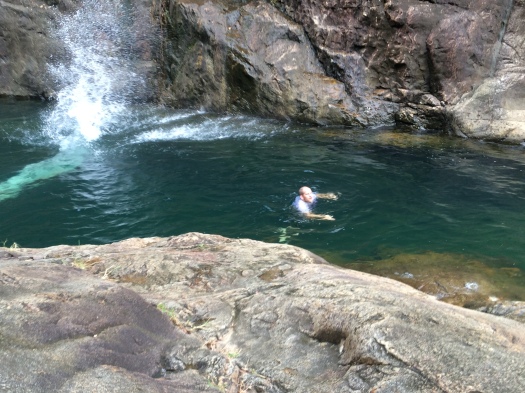 After a swim, we dried off and clambered back up the rocks to walk back to the little town. The taxi had waited in the area and we hopped back in just before it rained. The rain created the most amazingly vivid rainbow over one of the lakes we drove past, it looked close enough to touch but before I could snap a picture it was out of sight behind the jungle shrubbery whizzing by. 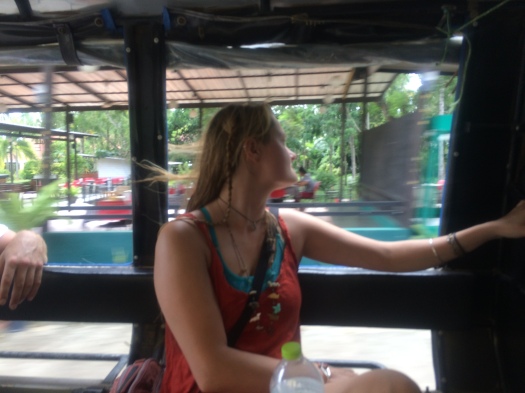 We got back and changed before meeting at The Magic Garden again for dinner. We found out that had very good offers on at the huts that belonged to the restaurant that included most meals. We were due to check out the next day so we decided to give it a try there. 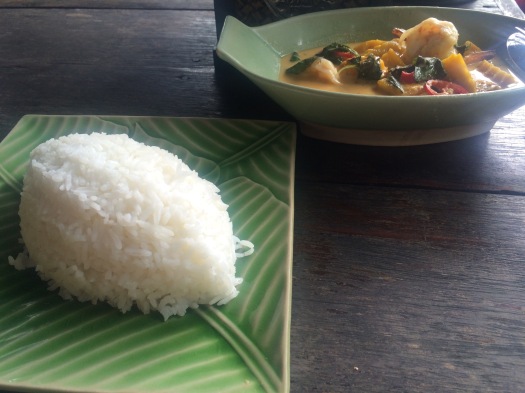 J showed us a few bars before we headed back for an early night. One was called the Chilli Garden, a tiny little place more the size of a food vendor shack but with a fantastic atmosphere. They sell shots, some of which are home infused with a variety of Thai herbs. 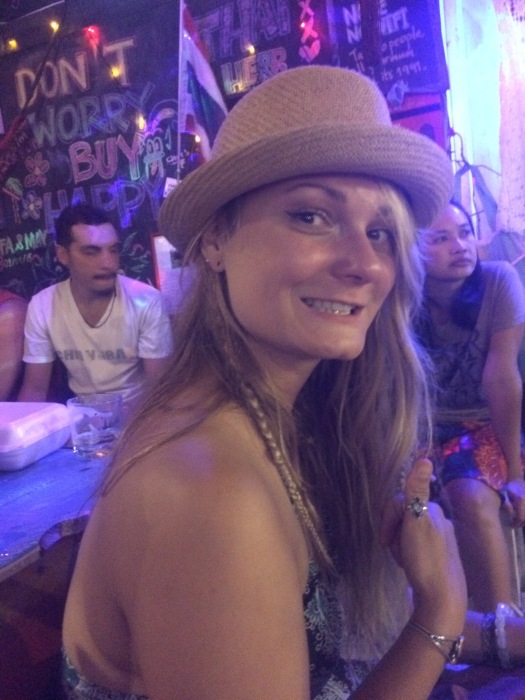 In the morning, we loaded all our stuff in our back packs and trekked up the hill in the sun for a good 10 minutes before a taxi appeared. Relieved and very hot, we jumped in and went up to Magic Garden to go and rent a little bamboo hut…