We left Yogyakarta early in the morning and piled into a minibus that had seen better days.

It took around 10 hours until we were up in the mountains, greeted in the driveway of our accommodation by men wrapped in ponchos against the chilly air.

There was a very simple place to get food where tea, coffee, and three meal options were served. The meals were quickly thrown into a wok in the corner by the lady with a blanket wrapped around her shoulders, as the husband watches a crackly game of football on the small telly. 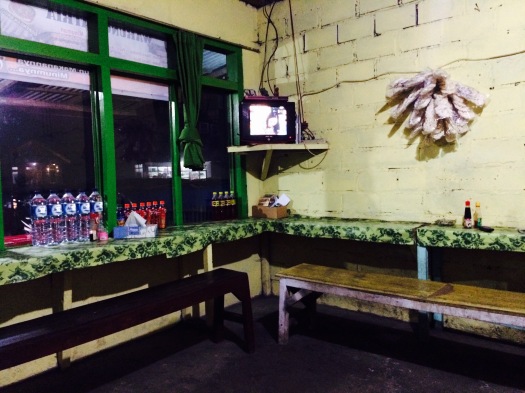 We slept under warm fluffy blankets and woke at 3am, having a lukewarm shower before getting ready in the cold to head out in a jeep to the sunrise viewpoint.

From the viewpoint, you can watch the sunrise cascade over a view of trees, mountain mist and smoke billowing from the volcano.

That is if you can push your way through the hoards of tourists taking selfies to get a good vantage point.

The shreiks, chatter and amount of people certainly ruined the serendipity somewhat that you would expect of a mountain sunrise and I cursed under my breath for not thinking ahead enough to scout out a quiet spot.

After this we hopped back in the jeep and headed down the mountain passes to the wide open space we would walk across to hike up to the crater. Against a foggy backdrop, silhouettes of men on horseback ran alongside the jeep.

We got out onto the foreboding landscape and began to make our way through the eerie fog where the occasional ghostly outline would appear of a cross, a lonely temple, or a solitary figure on their way to the stairs carved into the volcano. 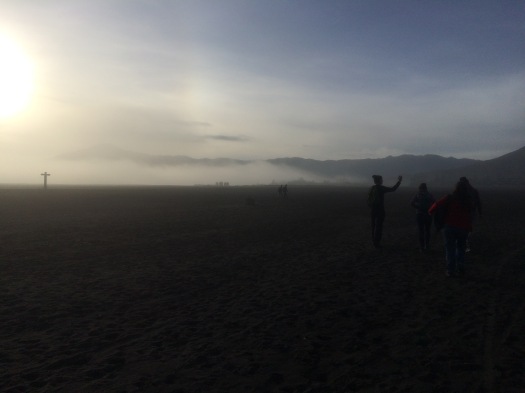 The hike or rather climb up the stairway is relatively short though the altitude makes it more difficult. You’re surprised at how out of breath you become from such a simple task and stop repeatedly to try and gasp more air into your lungs. 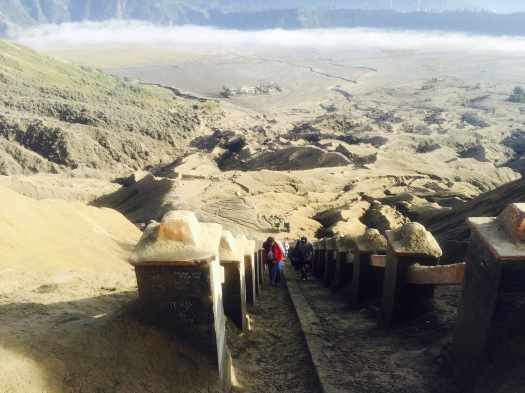 When you do reach the top, you’re greeted by a surface that seems to be covered in sand. The ash spreads over the volcano shrines and fruit offerings in a smattering of grey dust. 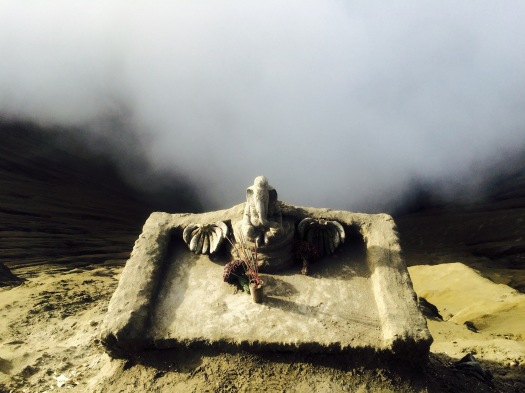 From the hole that you are staring at billows a consistent plume of acrid smoke which is far from pleasant if the wind changes direction.

Someone has altitude sickness and vomits off the side.

Your feet walk along the narrow path close to the edge as you take in the view of such an alien landscape. 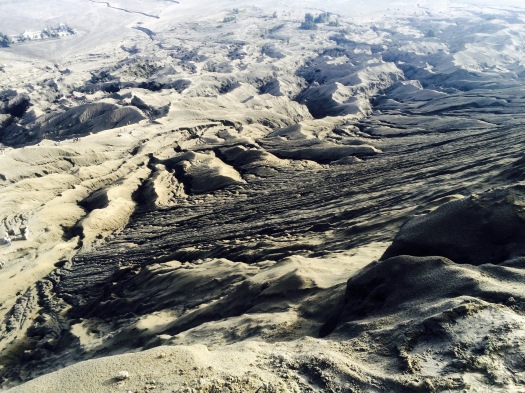 You return down the staircase as groups of tourists arrive on horseback and pass a series of curious faces carved into the layers of solidified ash.

Back at the accommodation, you’re given a breakfast box which is the most dire excuse for a meal you’ve ever set eyes upon:

Two slices of bone dry white bread, a solitary egg boiled to oblivion with a grey yolk, a fat tough red banana and a cup of water.

After the breakfast box, you’re herded back into the minibus with your backpacks to continue your onward journey for a further several hours to the ijen crater.