Walt Whitman said that ‘there is no place like it, no place with an atom of its glory, pride, and exultancy’. Joan Didion said she ‘was in love with the city, the way you love the first person who ever touches you and never love anyone quite that way again’. Manhattan is something special, and I’m sure you’re dreaming of traipsing those hallowed streets, and feeling just what all these writers and singers have been proclaiming for yourself.

It can be easy to throw money away or waste precious minutes when you’re on vacation, so it’s important to prioritise both the former and the latter before you travel if you can. Make a rough itinerary and make sure you include all the sights you’re determined to see. TripAdvisor is your best friend – you don’t want to use a whole evening of a five day trip on a restaurant you’ll end up wanting to forget.

Here are some of my personal Do’s and Don’ts…

DO look for the best possible deal on flights and hotels. If you’re travelling from London, Norwegian Air have a fantastic direct route at prices that will make your credit cards smile. The last time I flew with them, I spend £270 on a return to NYC, and ended up getting bumped up to Business Class for free. It always helps to be a solo traveller in those scenarios, and it doesn’t hurt to ask!

Try hostels, or bargain-bin hotels on Booking.com. As long as they’re in a location with good transport links, they’ll be enough – after all, you’re only going to be in your hotel to shower, and catch a cat-nap.

DON’T forget your travel essentials, like your ESTA travel documentation, or back up supplies for money. I lost my credit card on a flight once and had to rely on a companion for funds for the rest of the week – not fun, not clever.

DON’T use taxis or private car services unless you’ve got the cash to throw around. Particularly avoid using cabs when travelling to and from airports, as prices tend to skyrocket and that’s not even including tolls and gratuity.

DO try out the subway. The system is really simple to get to grips with, and makes life infinitely easier in peak traffic hours. It’s also a good escape from the weather extremes you might encounter in July or February, and you’ll often catch impromptu music performances, whatever the hour.

DO hit some of the obvious places, pre-book where you can, and try to squeeze it all in a day or so, so that you have more time to explore the unknown. Lady Liberty is overwhelmingly stunning in person, and the audio tours are really interesting if you’re looking to learn a little on your travels – if you don’t get a chance to make an official visit, the Staten Island Ferry goes right past it, and it’s free! The 9/11 Memorial and Museum is completely humbling and should be high on your to-do list, the atmosphere alone at Ground Zero shook me to the core.

DON’T pour money away on attractions where you don’t need to. In my own opinion, the fee to go up the Empire State Building is just simply not worth it when there are hundreds of other buildings around with amazing views, and often great bars. Try 230 Fifth for a rooftop bar with an unforgettable view, with food and drinks, open til late, or hit up the Rockefeller Center!

DON’T spend all your time in Times Square. While the bright lights are famous, and there are a lot of surprising characters, and big stores like M&M’s World, it can be obnoxiously busy and expensive.

DO live like a real New Yorker and try out some of the lesser known theaters or cinemas like independent movie aficionados Village East Cinema with their decadent ceiling mural and lavish, tiered velvet seating, or the Landmark Sunshine Theatre which offers midnight showings of cult movies.

Take a walk and try some streets less travelled – on one particular snowy walk I was lucky enough to find myself facing The Little Owl restaurant, which you’d be more familiar with as the building facade in Friends! 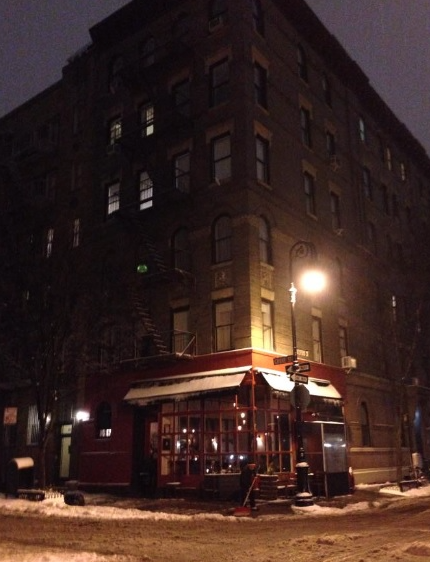 Luke’s Lobster – with several locations across Manhattan and Brooklyn, there’s a seafood selection for everyone – I particularly recommend the food court beneath the Plaza Hotel at the bottom of the majestic Central Park.
Trestle on Tenth – gorgeous spot for brunch in the ever-trendy Chelsea close to tonnes of thrift stores and…
The High Line – a quirky alternative to the traditional Manhattan parks, a converted above ground railway complete with food vendors, incredible street art and nighttime stargazing.
Strand Bookstore – famous for its ‘18 miles of books’, you can always pick up a treat here, including signed copies of brand new and rare books. Don’t forget to pick up some cool merch too!
Stephen A. Schwarzman Library Building – this branch of the New York Public Library is the big building with the lions on the front steps you see in every movie. Right by Grand Central Station, they give free tours throughout the day – worth going whether you’re a bookworm or not!

Levain Bakery – the best cookies you will ever eat in your life. And Taylor Swift is reportedly a regular!
Katz Deli – the biggest pastrami sandwiches you’ve ever seen in your life. Known for featuring on Man Vs Food and as the spot where Sally showed Harry what a fake orgasm sounds like.The Park – with a gorgeous atrium filled with trees and fairy lights, this is great for a boozy lunch, or visiting at night where it turns into a multi-roomed nightclub.
Above 6 – also at the foot of the park, by Columbus Circle, this cosy bar is nestled above a boutique hotel with a kitschy sushi bar and grill below, the cocktails are killers and the views from the cushion lined nook are sensational.

‘Shannon Bushby is a British writer, who studied English and Creative Writing at the University of Chichester. She is currently working on a book length manuscript of fiction and has most recently had work published by The Grief Diaries and The Crucible. Catch her blog online at http://www.shanbushby.wordpress.com.’