After attending the funeral ceremony, we carried on to the burial cliffs, caves and trees.

We arrived first at the cliffs and there were no other people in sight.

There are some older Tongkonans (traditional ancestral houses) near the entrance, their roofs covered in moss and plants.

Tongkonans are of a very unique design with their boat-shaped roof and are instantly recognisable.

We then approached the cliffs, walking across green fields towards more Tongkonans.

Above us, peering down from the cliff face are eerie rows of Tau Tau (wooden effigies of the deceased). 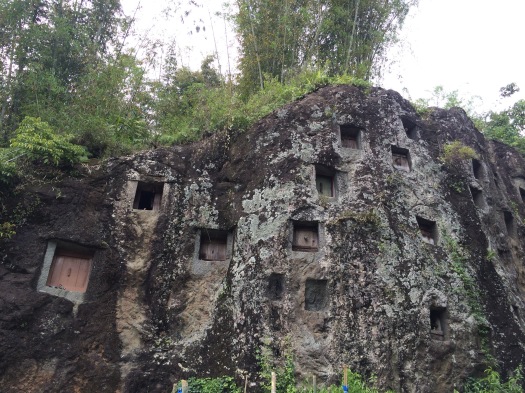 Johannes (my local guide) told me that in order to have a Tau Tau, a certain amount (usually more than 20) of bulls must be sacrificed at the funeral.

It is usually more for the upper-class members of society, and they look over the villages and protect the people.

The coffins are placed in graves carved out of the rocky cliff.

We then drove through a small village and an old lady collected the small entrance fee to the caves.

We parked the motorbike and walked through fields in the pleasant afternoon sun, crossing a bridge over a stream and into the burial caves.

The burial caves are like something straight out of Indiana Jones…

There are skulls, coffins and Tau Tau everywhere. On the rocks in front of you, above your head, in caverns, balanced on wooden beams, some coffins have split open and spill bones out onto the floor of the cave.

Generally, whole families can be buried here in the cave, the remains sometimes being placed in the same coffin.

You may spot a skull or two with a cigarette butt in it’s jaw because people come here occasionally and leave “gifts”. They will place a cigarette in the mouth and light it or sometimes leave food. 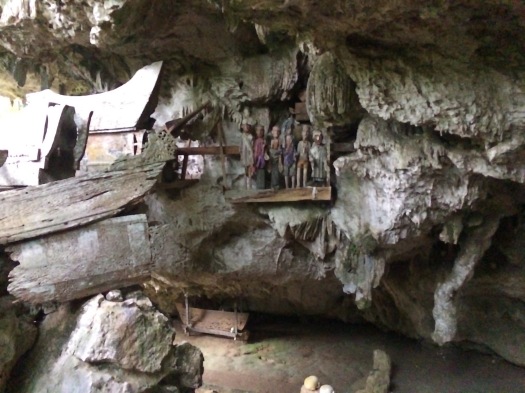 The last stop was to visit the baby tree…

When a baby died before growing milk teeth, they would cut a whole in a sacred tree and place the baby inside.

Over time, the bark would heal and close off the grave. They believed that the sacred tree, a symbol of life, would be the new womb/mother for the baby’s spirit and that the next child blessed to the bereaved family would grow strong and healthy and live a long life like the tree.

The heavens opened and the rain poured down, thunder and lightning cracked the dark sky and we ran for cover to a small shack.

We were joined by the staff and the only other European traveler I had seen the whole time I had been in Toraja.

The rain lasted for a long time, there was no power, and we sat in silence and darkness.

The staff drifted off to sleep and I sat and waited for the rain to stop.

Which took well over an hour. We had to wade back through deep puddles to the motorbike to make our way back.