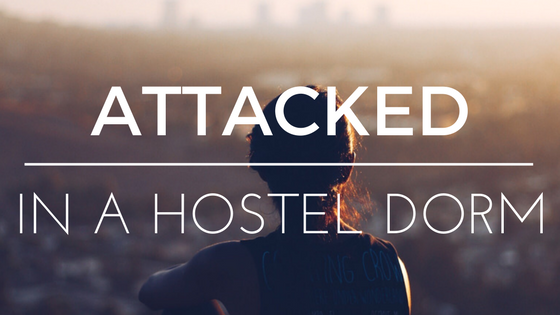 I spoke too soon. No sooner had I written my article on my top worst hostel experiences an event unfolded which was hands down, the worst and most terrifying thing that has happened to me ever. Not just in a hostel, or just travelling. Most terrifying experience period.

There was young man staying at the same hostel and on the first day, seemed perfectly normal and friendly. A group of lads from the hostel all went out for drinks, and apparently got separated from him as he had gone off with a local to “smoke something”. I saw him the next morning before he disappeared off on a trek, and though his behaviour seemed somewhat odd, I put it down to him still being drunk from the night before as he said.

However two days later when he came back from the trek, I walked into the dorm to change into gym clothes and he started rambling at me and talking well…absolute nonsense. It was completely incoherent. I said I didn’t understand and apologised, to which he insisted “You DO, you DO understand! Don’t lie! I can FEEL other peoples emotions and we’re CONNECTED. I KNOW YOU and I know you understand what I’m talking about!” I made a hasty excuse and left. I voiced my concern to a few others in the hostel but nobody realised what I meant until he came down in the evening. He was saying strange things and acting very erratically and it made me feel a little on edge.

That night at about 3am, I woke with a start to find him leaning over me in my bed, his hand on my leg, looking as though he was about to try and crawl into the bed. I screamed out for him to get away, he leaned in closer, his grip on my leg tighter. Filled with panic, I started punching and kicking at him. Usually, I keep a swiss army knife in my bag, but having recently made a flight, it wasn’t in it’s usual pocked but somewhere in my check in luggage. I didn’t have time to rummage for it. He ran back to his bed and began to cry and wail “I’m sorry, I’m so sorry!” whilst rocking back and forth.

I had no idea what his intentions were, his mental state or what he was capable of. I ran downstairs to the kitchen and came back with a knife. I went over to his bed and held up the knife so that he could see it. “Come near me again and I will fucking stab you” I whispered to him. “Do you understand?” He said that he did but I felt too uncomfortable to go back to sleep. Sure, I could have moved to a different dorm, but there was a young teenage girl also staying in the dorm. I didn’t want to leave her in the room with this guy but I also didn’t want to wake her up and make her panic.

He sobbed the whole night and muttered to himself. His behaviour pointed to a psychotic episode/mental breakdown. He added me on facebook on the first day so I went online and contacted a close friend whom he mentioned on his timeline and deleted and blocked him. I messaged the friend explaining the situation, asking if he was supposed to be on any medication, but I was assured that the behaviour was extremely out of character for him.

As soon as the owner woke up, I explained the situation and we tried to convince him to go to the local mental health hospital. His erratic moods were getting worse, he seemed dazed and confused and was talking to himself. One minute he would dance around and laugh, then he woulkd shout and people, then groan with his head in his hands, cry and then manically laugh at nothing. Despite this, he would not go to the mental health hospital. Instead, he left for the airport claiming he would fly to one of the islands. I received information from the friend the next day that he had in fact booked a flight home, only to be taken off the plane and taken to hospital where he would get the help that he needed.

Purely speculating but under the circumstances and given that he apparently had no underlying mental health issues, we came to the conclusion that he may have smoked Yabba. A drug in Asia commonly referred to as “the mad drug” and known for causing episodes of psycocisis and facilitating mental breakdowns.

So kids, don’t do drugs and always be prepared to defend yourself! You never know when you will just end up in the wrong place, at the wrong time, with the wrong people and you cannot always count on others to rush to your aid. This was a full dorm, yet despite my shouting, kicking, and punching, no one tried to help me or ask if I was ok!

10 Replies to “Attacked in a hostel dorm”