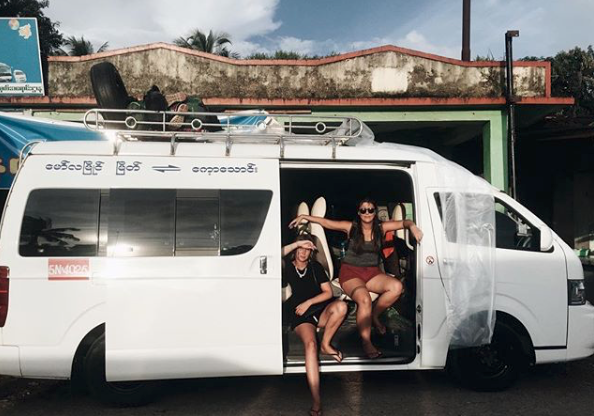 We didn’t stay in Mawlamyine. In fact, we rushed through it. We stepped off the rickety wooden boat onto the river bank, parted ways with half the group and said our farewells, then jumped in a tuk-tuk and made our way to the bus station.

From there, we purchased tickets to head to the Dawei Peninsula. We waited around in the baking hot sun, kicking up dust on the dirt track as we paced back and forth in boredom; lounged on the steps of the bus, and swallowed down some pretty mediocre fried rice whilst we waited for more people to purchase tickets and for the driver to appear.

One of the bumpiest, hottest and damn most uncomfortable bus rides of my entire life ensued. Simone was trying to book some accommodation with what little data she had left on her phone without much luck.

On a halfway stop we met some other Dutchies who told us where their accommodation was, and we figured we would try our luck and just go to the same place as they were.

We arrived at the bus terminal late at night to be immediately hounded by tuk-tuk drivers and taxis before we had even got both feet off the bus.

A late night tuk-tuk ride, in the dark, chugging up a disconcertingly steep and winding hill for over half an hour eventually brought up to the accommodation, where thankfully – they had room for us.

Since it was low season, it hadn’t been used much, and there was a rush to put some clean sheets on the beds for us and not much time for anything else. After a while of being in Asia though, (particularly if you’ve spent any time in a bamboo hut in the mountains or jungle) you become desensitised by all the creepy crawlies. So the dead cockroaches on our bathroom floor didn’t bother me as much as they would have done before.

We hastily wrapped our mosquito nets around our beds and crashed out within nanoseconds; only to be rudely awoken by a strange sound as the sun was rising…