One of the things that I love about staying in hostels is that so many of them offer great incentives for budget travellers like free walking tours. Of course, there is never really such a thing as a “free lunch”. Although the tours are technically free, you are asked to donate what you think the tour was worth, but there is no obligation or stipulation on how much that should be.

I still think it’s a great way of doing it though, and have been on numerous tours that operate in that way. I feel that the tours guides are usually a lot more genuine and attentive, and there is less of a feeling of being ripped off for a sub-standard overpriced tour.

One of the girls who worked for the company came to meet us at the hostel, and we hopped on the subway to the meeting point outside this delectable looking bakery…

We proceeded to wander through the cobbled streets of the Gothic Quarter, our eccentric tour guide bombarding us with a current of incredibly detailed information about Catalunya’s troubled history, which for some may have been too much, but I found utterly fascinating.

Not just the facts, but his passion and memory retention were quite inspiring, despite the fact he was rather strange and had the mannerisms of a recovering crack addict, but with a witty if not slightly dark sense of humour that I fully appreciated. 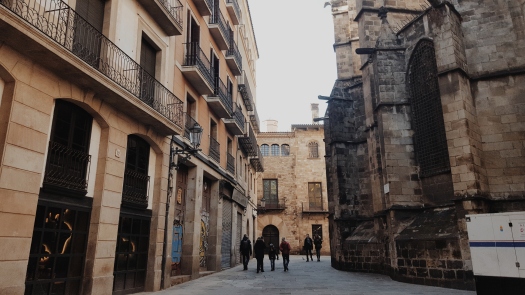 We wandered through buildings with courtyards filled with orange trees, through public squares where the distant sound of drumming and singing could be heard bouncing off the stone walls (some sort of carnival festivities)

We walked around the Santa Maria del Mar and visited the Fossar de les Moreres (grave of the mulberries) where the eternal flame monument stands.

Not that you could see the eternal flame on this particular day, although a slight waver of heat could be seen rippling across the top…

On the way back, we passed the arc de triomf, before our guide concluded the tour with a poem he had written about Spanish history. 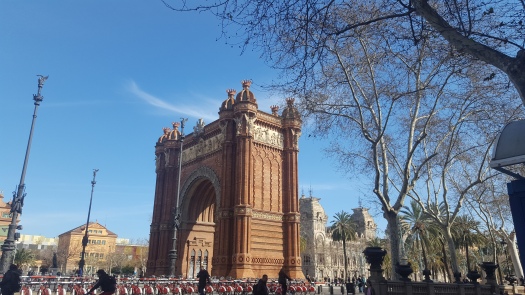 I greatly enjoyed the tour and learnt a lot about the history of Barcelona and Catalunya. The snaps I got didn’t really do justice to how pretty the Gothic quarter was, but the narrative of our tour guide made it so much more exciting and interesting than just the buildings, so it’s impossible to capture that aspect entirely.

The tour company was Sandemans and the tour guide I had was named Leon. I would highly recommend both the company and Leon as a guide. They seemed to have lots of interesting tours available, although I have seen some reviews which suggest their free tours are better than their fixed rate ones.

One Reply to “Free Walking Tour Of The Gothic Quarter – Barcelona”