When I did my free walking tour, my guide happened to mention in passing a favourite sweet treat in Barcelona — Catalan Hot Chocolate. He scrunched up his nose whilst he described what he called “diabetes on a plate”, a hot chocolate so thick that you ate it with a spoon instead of sipping it, and which often came with a side of whipped cream or churros to dip in it. And well, as soon as he mentioned it, immediately thought that sounds like something I want to try!

During my stay in Barcelona, it very nearly snowed (much to the shock of all the locals). It was the coldest winter and the closest they had got to having snow in 90 years. Although the days were often sunny (but there were a few overcast afternoons and downpours) the temperature was quite chilly.

So it seemed like an appropriate time to hunt down a decadent, creamy cup of hot chocolate. T was working during the day, so I looked up a few places, one of which was quite close to me, and set out on my mission… 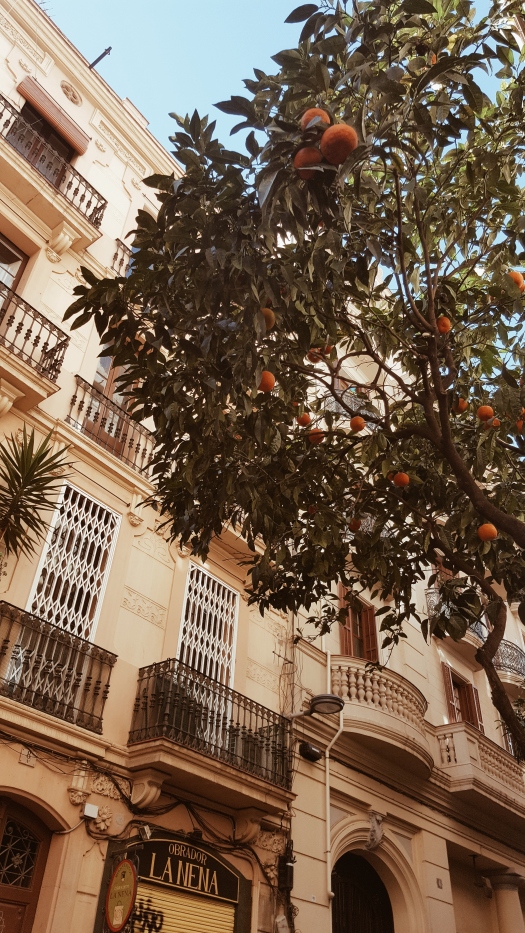 Despite the fact that it had been so chilly, orange trees bearing fruit lined the streets of Gràcia, the neighbourhood where I was staying, their colour popping against the bright blue sky. 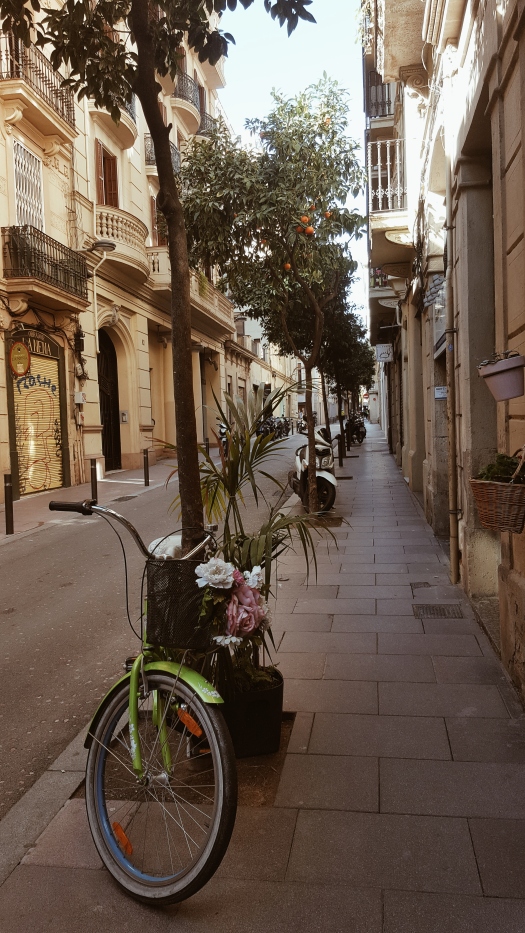 I wandered down residential streets lined with trees, flowers and sepia-toned apartment buildings. Passing by underneath balconies and catching glimpses of how people spent their daytime hours.

I found myself walking through a string of backstreets and alleyways, which much to my delight, were covered in colourful quirky street art.

And after a few wrong turns, just as the sky had all of a sudden turned grey and started to drizzle with rain, I found myself on the doorstep of La Nena.

La Nena (“The Girl” in Catalan) is a ‘Xocolateria’ which specialises in dairy products and hot chocolates. They offer homebaked cupcakes, cheesecakes and cookies as well hot drinks ranging from coffees and tea to a variety of hot chocolates.

With the only Spanish in my vocabulary being “no hablo español” and ” vino “tinto por favor” I had to make do with google translate and reaching over the counter with a rain-sodden menu in hand to point to the hot chocolate that I wanted to try.

At first the lady behind the counter eyed me up suspiciously, but shortly after placed a xocolata suissa down on the counter in front of me.

This is the famous decadent Catalan hot chocolate in all it’s glory, warm, thick and incredibly sweet, served with a huge pillowy dollop of whipped cream. I sat at the wooden counter, slowly making my way through the indulgent treat, occasionally glancing up at the few locals who had their heads buried in the local newspaper. 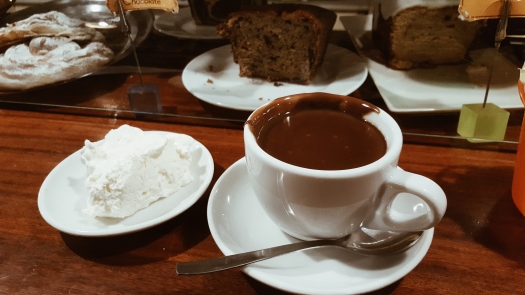 Catalan hot chocolate is absolutely worth a try if you have a sweet tooth and the weather leaves you wanting a big warm hug from the inside!